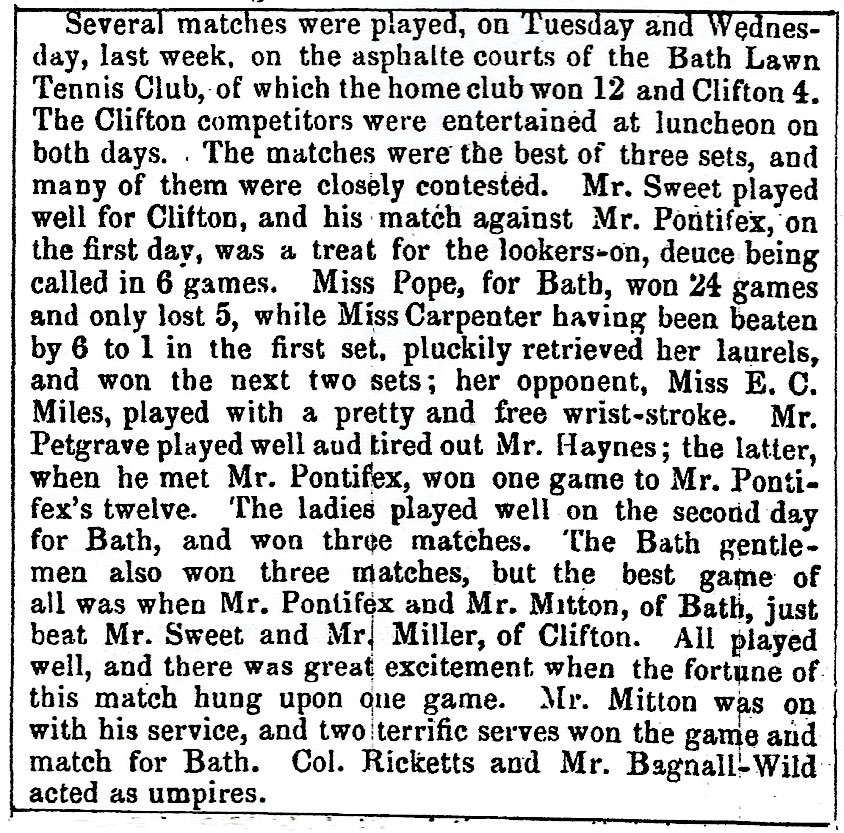 By 10th May 1882, competition with other clubs was already being reported in colourful terms in the local press (see extract on left).

Despite the outcome here, we were soon beating local opposition and the emergence of large regional tournaments enabled our members to test their mettle against players from further afield and learn from them. After the West of England tournament in Bath in 1882, Monty Butterfield’s name was engraved on their large and beautiful silver trophy, still to be seen there today.

On 23rd June 1886, CLTC was to launch its own Open Tournament, with Pastime (the leading tennis periodical of the time) printing the following favourable and informative review in June of that year:

This meeting, the first held at Clifton, commenced on Monday last and will conclude on Saturday. In the midst of a neighbourhood where lawn tennis is very popular, and situated in the heart of Clifton, and within a few minutes’ walk of Bristol, the ground of the Clifton Lawn Tennis Club offers advantages for a tournament which few other clubs possess. Under the honorary secretaryship of Charles Lacy Sweet the club prospered apace, and it now possesses, within its compact enclosure, four grass courts and three of asphalte, with a comfortable pavilion, dressing rooms, etc.

Lacy Sweet was a colourful character who packed an awful lot into a short life. He was a close friend of the Renshaw brothers, the greatest players of the 1880s, who would have known our club well. In his late twenties, he accompanied H. Grove to India, where they won the Championship of Southern India. Another jaunt with H. Grove and the Renshaw brothers, took him to Baron Rothschild at Vienna. ‘The visit was an immense success; the guests, 70-80, were simply electrified by the play, which was far beyond anything they had conceived possible’. His life was sadly cut short when, in 1892, at the age of 31, he contracted typhoid and died on 2nd November at the family house at 96 Pembroke Road.

With the emergence of the LTA, the development of the important Inter County Championships started in 1895. Top players from each county would play against neighbouring counties in the regional stages, working up to the national finals many months later. The Gloucestershire team, made up almost entirely of Clifton members won that first year and then again 8 times in the 9 years from 1898-1906. According to George Boucher, 17 of their 21 players over this period were from Clifton.